I heard Gillian Slovo, the South African-born author, last Saturday at the International Literature Festival Dublin 2017. She was talking, along with fellow writer Danielle McLaughlin, to author and psychotherapist Susie Orbach, on the topic of Why We Write. Orbach was fantastic in gently teasing out subtexts and hidden corners of thoughts – it felt more like being privy to an intimate conversation than listening to a panel discussion where, in the worst cases, the same old clichés are being rehearsed.

The questions of why we write, and how we write, fascinate me. END_OF_DOCUMENT_TOKEN_TO_BE_REPLACED

Truman Capote (1924-1984) knew a few things about literature, and about gossip. He did not study literature after secondary school, but he was writing every day since he was eleven years old, eventually publishing short stories, novels, plays and screenplays. He broke ground for a new genre, too – the real-life crime story. His book In Cold Blood (1965), about the murder of a family of four in Kansas, is usually called a nonfiction novel, which Capote researched for six years, travelling to the small farming community where the murders had taken place and later to the prison where the murderers were held before their execution. END_OF_DOCUMENT_TOKEN_TO_BE_REPLACED Alan Alexander Milne (1882-1956) is mostly remembered today because of a children’s book. He created Winnie-the-Pooh, the loveable bumbling teddy bear and his friends, putting his little son Christopher Robin as a character into the stories. But Milne wrote many more things – plays, poems, novels and newspaper columns. END_OF_DOCUMENT_TOKEN_TO_BE_REPLACED 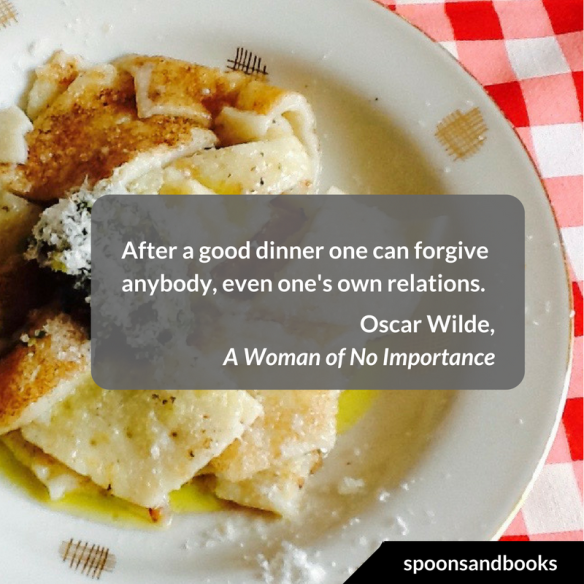 Oscar Wilde (1854-1900), the Irish playwright, novelist, essayist and poet, enjoyed the good life. He subscribed to the philosophy of aestheticism, of art for art’s sake and for providing refined sensuous pleasures. Living in London, he moved in fashionable social and cultural circles, and this is the world that is reflected in much of his writing, where characters meet in drawing rooms and at garden parties, and amuse themselves with witty banter and, again and again, food and drink. The humour of their dialogue is proof of Wilde’s great talent for wit – he was exceptionally talented at distilling sharp observations about people and about life into brilliant one-liners. His twitter account would have been legendary. Victor Hugo (1802-1885) was a French novelist, dramatist and poet, and is considered one of the greatest French writers. Outside of France, his best-known novels are Les Misérables and The Hunchback of Notre-Dame, although many may know them through their adaptations into numerous films, plays and musicals. END_OF_DOCUMENT_TOKEN_TO_BE_REPLACED

Paul Schmidt (1934-1999) was a US American professor of literature and translator of mainly Russian and German authors (Chekhov, Brecht…). He also wrote poems, plays and essays himself.

The above quote was taken from his essay “A Winter’s Feast”, published in Parnassus – Poetry in Review in 1990. The essay reflects on a passage from Russian author Alexander Pushkin’s novel Eugene Onegin, which was entirely written in verse. END_OF_DOCUMENT_TOKEN_TO_BE_REPLACED Seamus Heaney (1939-2013) was an Irish poet, playwright, translator and lecturer. He won the 1995 Nobel Prize for Literature and many other awards besides, honouring his prolific work “of lyrical beauty and ethical depth, which exalt everyday miracles and the living past.”

Born and raised in Northern Ireland, the topic of the struggle for civil rights and the sectarian violence in the region often shone through his poems. But he sought to reflect the private and apolitical side of it, describing the lives and voices of the people who lived and died in those troubled times.

His poetry was also evocative of his natural surroundings, of the bogs and seasides and not least the local food and foodways. He wrote of picking blackberries, peeling potatoes and eating oysters, “my palate hung with starlight”. The above quote is taken from his poem “Oysters”. It is a mark of his eye for the lyrical details of everyday life that he not only celebrates the food, “philandering sigh of the ocean”, but also the gift of friendship.

Gilbert Keith Chesterton (1874 – 1936) was an English journalist, writer and critic. He is now best known for his books around the fictional priest-detective Father Brown, but he was a prolific writer on many topics, publishing around 80 books and 4000 essays. He was fond of using humour in his writing, though they often dealt with serious topics such as politics, economics, philosophy and theology. This quote is taken from his essay “Cheese”, from the collection Alarms and Discursions (1910). The essay starts light-heartedly and even nonsensically, bemoaning the “neglect of cheese in European Literature”, but turns into a reflection about civilisation and modern society, and the value of diversity within them. “Good” civilisations are “varying and yielding, because they are alive,” he writes. Like good cheese.

Gertrude Stein (1874-1946) was an American poet, writer and art collector. Her work is largely experimental and part of the modernist literature and Cubist art scene around her. With her life partner Alice B. Toklas, she hosted regular salons in Paris where she lived for nearly fifty years. Guests included Pablo Picasso, Ernest Hemingway, F. Scott Fitzgerald, Sinclair Lewis, Ezra Pound, and Henri Matisse. Alice was an accomplished cook and gardener, and they enjoyed eating and drinking well. Gertrude Stein often wrote in stream-of-consciousness style, and her writing tends to loop around repetitions of words and phrases. That makes it harder to read on the page but when read out loud, the writing shows a rhythm and cadence that often reminds me of chants and oral literature like epic ballads, and it becomes much more understandable. She also has a sense of humour that keeps shining through, reminding us to not to take the solemn business of life and literature all that seriously.

Italo Calvino (1923-1985) was an Italian novelist and journalist. He wrote several essays on literature and writing. This quote was taken from “Why read the classics?” (1986 – read it online here).