Paul Schmidt (1934-1999) was a US American professor of literature and translator of mainly Russian and German authors (Chekhov, Brecht…). He also wrote poems, plays and essays himself.

The above quote was taken from his essay “A Winter’s Feast”, published in Parnassus – Poetry in Review in 1990. The essay reflects on a passage from Russian author Alexander Pushkin’s novel Eugene Onegin, which was entirely written in verse. END_OF_DOCUMENT_TOKEN_TO_BE_REPLACED

Gilbert Keith Chesterton (1874 – 1936) was an English journalist, writer and critic. He is now best known for his books around the fictional priest-detective Father Brown, but he was a prolific writer on many topics, publishing around 80 books and 4000 essays. He was fond of using humour in his writing, though they often dealt with serious topics such as politics, economics, philosophy and theology. This quote is taken from his essay “Cheese”, from the collection Alarms and Discursions (1910). The essay starts light-heartedly and even nonsensically, bemoaning the “neglect of cheese in European Literature”, but turns into a reflection about civilisation and modern society, and the value of diversity within them. “Good” civilisations are “varying and yielding, because they are alive,” he writes. Like good cheese. 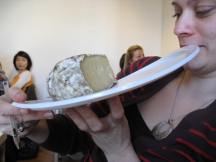 The taste of cheese curd changed my life.

I had been well-trained in the art of composing a cheese board: combine fresh with aged cheeses, cow milk with goat and sheep, soft textures with firm, subtle aromas with pungent. Add wine. Achieve satisfaction. I was even getting rather proficient in remembering the curriculum of particular cheeses: this one from high mountain ranges, covered in luscious pastures, that one from craggy hills where sheep roam freely nibbling on wild herbs. But I hadn’t yet quite understood cheese.  END_OF_DOCUMENT_TOKEN_TO_BE_REPLACED