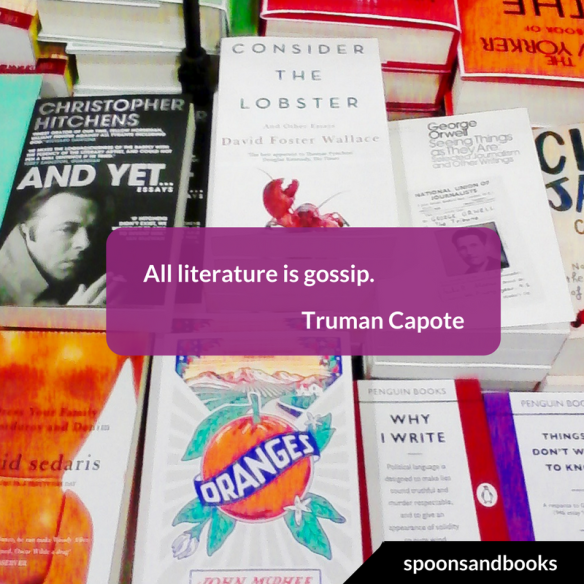 Truman Capote (1924-1984) knew a few things about literature, and about gossip. He did not study literature after secondary school, but he was writing every day since he was eleven years old, eventually publishing short stories, novels, plays and screenplays. He broke ground for a new genre, too – the real-life crime story. His book In Cold Blood (1965), about the murder of a family of four in Kansas, is usually called a nonfiction novel, which Capote researched for six years, travelling to the small farming community where the murders had taken place and later to the prison where the murderers were held before their execution.

In Cold Blood was not the first or last time that Capote used real life as material. He mined his own life for experiences and included himself and people he knew as sometimes little disguised characters in his writings. This led eventually to his falling out with the New York social scene that Capote had been eager to belong to in the 1960s.

Author and professor Colum McCann advises aspiring writers: “Plot takes a backseat in a good story because what happens is never as interesting as how it happens.” This is why we enjoy reading or watching stories based on real-life, even well-known historical events. We know the ship will sink, but we watch Titanic nevertheless. We know of people’s triumphs and failures, but we are keen to understand how they came to that point, the decisions they made and challenges they overcame to get there. The literary treatment, like Capote’s writings, adds another element that we may not find in straight documentaries or news journalism: the rhythm and imagery of storytelling, the depth of character and scenic backdrops. Capote himself acknowledged this, too: “To me, the greatest pleasure about writing is not what it’s about, but the inner music that words make.” But still, he just could not resist the temptation of the gossip.