Where to find books in English in Berlin?

No.1 – The Amerika-Gedenkbibliothek – a public library, free to enter and cheap to borrow. However, the selection in English is quite small. It’s split up by country (UK/Ireland, Australia/New Zealand, North America) and they are not all next to each other. Having said that, the shelves are clearly labeled and not hard to find.

Several terminals are available to visitors to search the collection – I overheard staff saying that for reasons of space, they do not put everything on the shelves, so it may be worth your while. 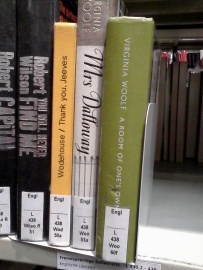 And they have Woolf’s classic essay/manifesto “A Room of One’s Own”. Bravo!

The English books in the library are mostly fiction with a few creative nonfiction titles scattered through. The ones I saw were all written by novelists such as Virginia Woolf, Colm Tóibín or Roddy Doyle, that’s probably how they snuck in.

My favourite discovery: Tóibín’s “New Ways to Kill Your Mother”, about writers and their families. Great title!

Food books? Not a great show.

The library was set up in 1954 with a donation by the USA after West Berlin held up during the blockade of the city by the Soviet Union in 1948/49. Hence the name and the quite pretty mid-century building. #booksnotbombs!

There are plenty of desks to read or study, but don’t rely on getting a seat if you just saunter in. The on-site café is another option. The library has self-check-out machines and lockers, and there are copiers and computers, too. A proper library, in short! #welovelibraries