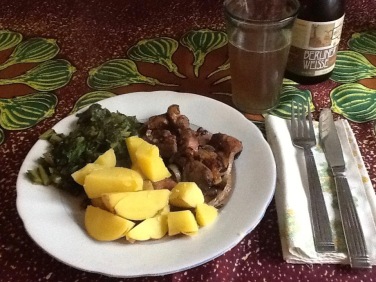 My lunch today was a “Berlin Lunch” in more senses than one. Fried Liver with Potatoes is a traditional Berlin dish, and I also made it with all local ingredients: potatoes, greens, liver, onions – and craft beer.

In a city with 3.5 million inhabitants like Berlin, a “local” food producer is not necessarily someone I can visit on food. I don’t visit my best friends on foot, because I would be walking all day… In this case, my local producers live within 75km from me. The liver came from a heritage breed saddle-back pig, reared on the Braunsberger Höfe in Braunsberg (73km from Berlin-Kreuzberg). Potatoes, onions and the greens were grown by LWB Blumen Oli in Bad Belzig (63km away). The greens are called stielmus. That is a local name for what the Italians call cime di rapa – it’s basically the green tops of root vegetables, such as beets. They are leafy greens with long stalks. I usually cook the leaves separate from the stalks, simply sautéed with a little oil and water. The stalks I treat like a poor man’s asparagus – steam them as a side dish or omelette filling, for example.

The “before” picture – my weekly shopping of local produce.

Lastly, to stay with the Berlin theme, I opened a bottle of Brewbaker’s Berliner Weiße, which had travelled a mere 8km to my kitchen table. Berliner Weiße is not to be confused with Bavarian Weißbier. It is, in fact, a light, sour beer – sour because of the second fermentation with lactic acid bacteria, the kind that gives yoghurt and sauerkraut their characteristic gentle acidity. Very popular among Berliners in the late 19th century, it lost its appeal in the following years. By the beginning of this century, only two breweries still made it, and unfortunately in a very industrial style, sold often pre-mixed with sweet, fake-tasting* syrups. The situation was so dire, the beer was deemed nearly extinct and put on the “Ark of Taste” by Slow Food. In recent years, the upswing in craft beer brewing has seen a revival of this old speciality. With its refreshing taste and low alcohol content (2.5-3%), it makes a good aperitif, or food partner.

It certainly went well with my hearty lunch. Fried liver with onions and apples, served with mashed potatoes, is considered a typical traditional dish for Berlin. Usually, the recipes call for calf’s liver. But I was thinking about this.

Potatoes, meat and legumes were good nourishment for Berlin’s growing population in the 19th century. Between 1747 and 1877, the number of Berliners grew tenfold, reaching a million in 1877. By 1920, there were four million people living here. They were attracted by the many factories that operated in the city in the 19th century, including big names such as Siemens, AEG and Borsig – at its height the world’s second-largest producer of steam locomotives. Berlin produced dynamos, turbines, locomotives, electrical equipment and chemicals. It was a manufacturing hub of Germany, and for a while also its banking and financial centre. The new workers of Berlin needed hearty food that sustained them during their days in the factories – and it had to be cheap. Look at the list of dishes above: these are not made with exquisite cuts of meat. They use tough cuts that need to be boiled, off-cuts made into mince meat, sausages or head cheese, as well as offal and blood. When there are a lot of mouths to feed, you don’t get far with fillet steak. Besides, there’s a lot of pork. Pigs live happily of potato peels and kitchen scraps in back yards, unlike cattle who need space and grass. So I imagine that the 19th century workers of Berlin ate a lot more pig’s livers than those from calves. I can also imagine that they might have eaten beet greens – efficiently making use of every part of the plant.

But don’t pity the poor Berliners – I can assure you it tastes delicious! Here is how I prepared it:

You need:
Potatoes – 4 medium-sized (or how much you think you’ll eat…). I like floury potatoes,
but waxy ones work just as well.
Beet greens – 2 bunches (as in, of 2 plants), leafy tops only. If you don’t have them, you can eat other vegetables with this, like broccoli or carrots (I recommend steamed or boiled). Or a green salad.
Onion – 1, lady-fist size
Liver – 1, about 250g
Flour (2 TBSP), salt, pepper, paprika
Butter (2-3 TBSP) and oil for frying 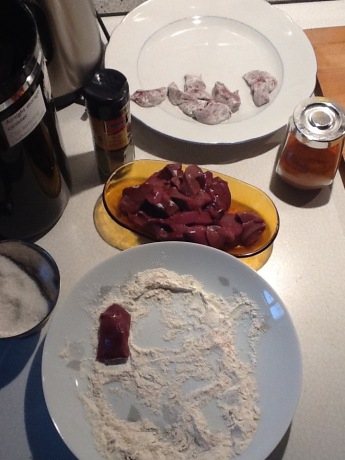 – Wash and/or peel the potatoes (I like them unpeeled), cut them into large chunks. Put them into a pot, add half a teaspoon of salt, then cold water to just cover the potatoes. Bring to a boil then turn the heat down a little, simmer until tender (just test with a fork if they are crumbling when you touch them). Drain the water off when done.

– While the potatoes are starting to heat up, rinse the leafy greens, shake dry and roughly chop them. Heat a little oil in a non-stick pot or pan, add the greens, a sprinkle of salt and a tablespoon of water, and cover with a lid. This way, they are semi-steaming. Check every once in a while, you might have to add some water. They are done after about 5 minutes.

– Cut the onion into slices. Heat 2 tablespoon of butter over medium-heat in a frying pan, add the sliced onion and let it soften gently while you prepare the liver.

– Rinse the liver quickly and pat dry. Cut it into strips the size of your little finger. On a plate, mix flour with a sprinkle each of salt, pepper and sweet or hot paprika. Dredge the liver strips in the flour mixture.

– When the onions are soft, add the floured liver strips to the frying pan. If it’s too dry, add a little butter or oil. Fry gently over medium heat for 2-3 minutes. Check the thickest strip by cutting into it: I like my liver gently pink, but if you are not happy with that, keep them in a little longer.

– Serve all together with a glass of Berliner Weiße!

Tell me: What’s a traditional dish where you live?